One Small Chance by Lucinda Whitney 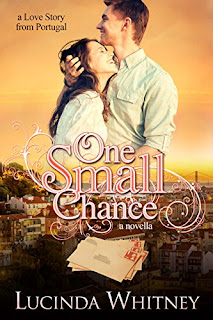 Isabel Antunes is content with her life as director of the British Academy in Lisbon. Then she's hit by a man on a bike--a man her boss just hired to be her assistant. Despite Simon Ackerley's repeated assurances to the contrary, Isabel believes he's after her  position, but she won't hand it over without a fight. As if dealing with him all week is not enough, he shows up at church as well. Her only solace is in writing to the pen pal she knows as "Elliott."
Simon Ackerley told his father he was moving to Lisbon for the job. But that isn't the only reason. Simon is looking for Amelie, the pen pal he's written for fifteen years. A woman he knows everything about- except her real name and address. When the accident reveals that Simon's prickly co-worker Isabel is the elusive Amelie, he knows he has to win her trust before he can confess his true identity. If only he could tell her the actual reason why he's come, he's sure Isabel would treat him differently. But she's not ready for the truth.

I LOVE Lisbon, Portugal and reading this cute book took me right back there. The world is small and there is always that possible chance encounter. Isabel has a long time pen pal that she has written for years but knows little about his personal life like his real name. Little does she know that the new guy at work is her longtime pen pal. I love how Simon was so nice and patient. He worked on getting Isabel to trust him before saying much. I loved this cute novella. The characters had great chemistry and the descriptive details and setting were very well written. It is a clean, LDS romance novella. It is short, sweet, and an easy read!

Email ThisBlogThis!Share to TwitterShare to FacebookShare to Pinterest
Labels: Lucinda

Bree
I have two of the best jobs...I am a stay at home mom and a cosmetologist. I have the best husband and the cutest twin boys... And when I need a little relaxing me time you will usually find me with a book in hand or of course my kindle. I love to read and have a love for swoon worthy, weak in the knees, sweet, CLEAN romances with happy endings. They are my weakness!